What's Left of Me by Kat Zhang 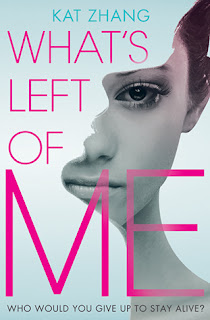 I should not exist. But I do.

Eva and Addie started out the same way as everyone else—two souls woven together in one body, taking turns controlling their movements as they learned how to walk, how to sing, how to dance. But as they grew, so did the worried whispers. Why aren’t they settling? Why isn’t one of them fading? The doctors ran tests, the neighbors shied away, and their parents begged for more time. Finally Addie was pronounced healthy and Eva was declared gone. Except, she wasn’t...

For the past three years, Eva has clung to the remnants of her life. Only Addie knows she’s still there, trapped inside their body. Then one day, they discover there may be a way for Eva to move again. The risks are unimaginable-hybrids are considered a threat to society, so if they are caught, Addie and Eva will be locked away with the others. And yet...for a chance to smile, to twirl, to speak, Eva will do anything.

The premise of this book drew me in. Imagine living in a world where you are born with two souls in one body - one pair of eyes left to be controlled by two different personalities. Reading the synopsis, I was reminded of The Golden Compass, The Host, and an interpretation of twins. It was a new idea, something I'd never come across before, and I was instantly intrigued.

The story was told from the point of view of Eva, the recessive soul, who according to society should have eventually disappeared, leaving the control of the body with Addie, the dominant soul. However, things didn't exactly go to plan - although Addie was eventually declared normal, as in not a hybrid, Eva was still present; yes, unable to provoke movement and thought from the body, but still present. This installment of the Hybrid Chronicles tells the tale of how the pair begin to learn that it is possible for both of them to live together - along with some serious consequences.

This story is practically the definition of an easy read. Zhang's writing was easy to slide into, and I was almost instantly lost within the pages of the story. The descriptions were good, but not too long, the characters well thought-out but not overdone, and the story slid by effortlessly. However, I did find a few things a bit confusing.

First of all, I'm not sure what genre this story is, exactly. When I first picked it up, I was certain it was dystopian - however, no year was mentioned, no time zone really clarified, so I'm thinking maybe it was set in a Universe similar to our own, but different due to the fact that they have two souls instead of just one. I think it would have been nice if Zhang had briefly given the reader an indication of where the story was taken place.

I liked how that with every single body, Zhang created two completely different characters. For example, there was Addie and Eva - Addie, who was quite quiet, withdrawn, and selfish, and Eva, who was determined, persistent, and bright. I think the only thing that was similar about them was the fact that they were both incredibly dull. I will take my hat off to Zhang for the different characterization, but I never really felt like I could connect with the characters. Addie, I hated her - she was boring, unappealing, and she just grated on my nerves. Eva was slightly better, but as the main protagonist, I didn't feel like I was able to penetrate her character and get underneath her skin, or be able to relate to her, something I always need in a good heroine. I disliked Devon, as he was very distant, and I liked Ryan, but again, I felt like I was never told enough about him to be able to like him. Hally and Lissa both annoyed me, too. The only character's I really liked were Jackson - a character I hope to see in future installments of this series - and Eli/Cal, who we didn't see much of, and I doubt we will in the future. It was disappointing, and I think I would have enjoyed the book much more if the character's had been a bit more developed.

However, despite my dislike for the majority of the characters, I thought the first 80% of the novel was well-written, and captivating. I read large chunks of it at a time, and really got into the events unfolding in the novel. Unfortunately, the ending was so anti-climatic, I don't know whether to laugh or cry. There was a massive build-up, and I was on the edge of my seat , waiting to find out what would happen. And the climax to the novel was alright - not brilliant, but alright - but afterwards...I can't even describe how awful it was! It was just a very poor ending, one of the worst I've come across in a while. Which was a shame, because the build-up was tremendously good.

Although I have complained for most of this review, I did enjoy the novel. The characters and the ending of the book were pretty bad, yet it was a very easy read, and I still find the initial premise fascinating. If you want to read The Golden Compass, but feel it is too long for you, then I definitely suggest trying this read first. Although they are very different, the twin souls idea is quite similar, and considering that it is such an easy read, I really think it is worth a shot.
Rating: 3/5
Posted by Nina @ Project Read and Review at 14:17