Pretend You Love Me by Julie Anne Peters 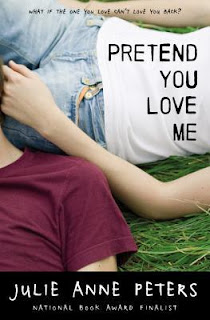 Every day in Coalton is pretty much the same. Mike pumps iron in the morning, drives her truck to school, plays softball in the afternoon, and fixes the neighbors' plumbing at night. But when an exotic new girl, Xanadu, arrives in the small Kansas town, Mike's world is turned upside down. Xanadu is everything Mike is not—cool, complicated, sexy, and...straight.

If you've been following me for a while, you'll know that I love Peters books, and even though I have a stack of books on the waiting to be read pile, I couldn't wait to start reading it when I got it last week. And I really enjoyed it. Admittedly, I didn't click with it when I first started, which I usually do - but after a while, I was hooked.

It's basically a novel about this girl, Mike, who is a lesbian and has lived in this small town in Kansass her entire life. So it's a bit of a typical storyline - how would the town take her when they found out she was gay? But actually, that wasn't the storyline at all. The storyline dealt with a lot more problems than just liking the same sex - it was about liking someone who couldn't love you back; about coming to terms with living without someone; about learning to accept who you are; about learning that dreams can come true, you just have to believe. And at the end, I did look back on the novel and felt this wave of emotion, like I do with all her novels. I can guarantee you that after reading just one book, you will learn something new about yourself - or accept it. And I think that is a pretty amazing thing for a book to do.

However, there were some things I didn't like - another first. I'm pretty used to adoring all of the characters in a Peters novel, but it took a while with Mike. I think that is probably because she's very sporty and active, and I'm...well. I'm a couch potato. But one thing that really put me off was how harsh she was to everyone. Of course, she was going through a lot, and I would say that she is one of the strongest characters I have ever read about. But she was horrible a lot of the time - to Jamie, to Darryl, to her mum, her teachers...The only person she was nice to was Xanadu, which got me rather annoyed - though I won't say why, because spoilers. But she did annoy me a bit, which is why I wouldn't give this book a ten.

But despite it not being a ten, I would recommend it if you like books by Peters and David Levithan and John Green, and are interested in learning more about what it is to be LGBT. I still really enjoyed it, and I can't wait till I get my hands on another novel of hers.
Rating:4/5
Posted by Nina @ Project Read and Review at 19:30 No comments:

Alice In Wonderland by Lewis Carroll 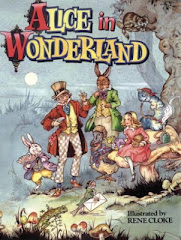 Journey with Alice down the rabbit hole into a world of wonder where oddities, logic and wordplay rule supreme. Encounter characters like the grinning Cheshire Cat who can vanish into thin air, the cryptic Mad Hatter who speaks in riddles and the harrowing Queen of Hearts obsessed with the phrase "Off with their heads " This is a land where rules have no boundaries, eating mushrooms will make you grow or shrink, croquet is played with flamingos and hedgehogs, and exorbitant trials are held for the theft of tarts. Amidst these absurdities, Alice will have to find her own way home.

So when I was about seven, I picked up Alice In Wonderland for the first time...and I didn't finish it. Why? Because let me tell you right now - for those of you who get confused really easily, this is not the book for you. Alice In Wonderland is a weird and extremely crazy and confusing novel - brilliant, but confusing. And although Alice herself is seven years old, this isn't a book I can imagine a child reading, in the sense that you have to make yourself persevere at times. But although it took me about two weeks to read it, it was well worth it!

Anyway, apart from the reason that I don't like giving up on books, the reason why I picked it up again was because of Tim Burton's adaptation of it - yeah, I'm a Burton nerd! And I practically know about half the script to it, so I thought - well, I'd better know the story behind the script (especially since I've pledged to read the printed word...oops!). I have to say, I was really surprised how different the two books are compared with the film- and for once, I think both are great, in their own unique ways.

I have to say, I do love all the characters Carroll created. The Hatter, the Caterpillar, Tweedle Dee & Tweedle Dum and the Queen of Hearts, being my particular favourites. I think what I liked the best was the fact that they are all mad - but so differently mad. No two people (okay, aside from the Tweedles, and the Hatter and the Hare) have the same personality, which I think makes all the different chapters interesting. However, because they are all so different, I felt that the continuity isn't that good, especially in Through the Looking Glass. I think it would have been better if more was explained, especially where the numerous poems were concerned - I wanted Carroll to explain what a Jabberwocky, a Bandersnatch was - and although at a certain point with Humpty Dumpty, I thought we were getting somewhere, we didn't. But I also think that added to the mystery that is Wonderland, the fact that every question is left unanswered - however irritating that may be.

Overall, I think you have to be in the right mood to read the books - tolerable, perhaps? After a while, I did accept the fact that I wasn't going to get the answers I wanted, and just stuck with going along for the ride - and I did really enjoy it, especially where the Queens and my favourite characters were concerned. If you love fantasy novels, I think you should read these two books - Wonderland is officially the Queen of Fantasy World's, and if you have not read it, you are definitely missing out.
Rating:4/5
Posted by Nina @ Project Read and Review at 22:23 1 comment:

In My Mailbox is a weekly meme hosted by The Story Siren, where bloggers show what books they have bought, been gifted or borrowed in the last week.