At the end of September, I read the first novel in this amazing trilogy, Forsaken, and took part in the blog tour. So when I got the opportunity to take part in the sequel's tour - well, I just couldn't resist! And lucky for you guys, there is also another amazing giveaway. Click below for more information.


Kristen Day is a southern belle at heart with a crazy streak that desperately tries to escape at every opportunity.  She loves all things nostalgic, rustic, and quirky.  She’s been told she sees the world through rose-colored glasses, but she prefers to think of them as kaleidoscope glasses - swirling and morphing reality into something she can digest (who hasn't pretended those pasty lima beans were really kiwi strawberry jelly beans?). 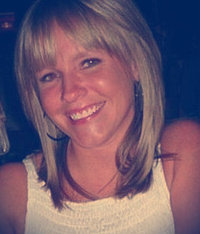 She is the author of the Daughters of the Sea trilogy, which includes Forsaken, Awaken (October 2012), and Chosen (Winter 2012).  She loves all books, but really enjoys writing young adult, paranormal romances.  She’s loved to write for as long as she can remember.  Her first published work was her poem RED in second grade (you guessed it - it was a poem about the color red - life altering, right?) that won her 5 gold stars and a spot in her elementary school's poetry book. That's when her addiction to the written word officially began.  She was the only kid in fifth grade that actually enjoyed diagramming sentences. Go ahead and laugh - its okay.

When she’s not writing she’s making jewelry, painting, feeding her addiction to sweet tea, watching the Discovery Channel, or going on random adventures in the mountains of North Carolina with her amazing husband. She was born in Boone, NC and graduated from Appalachian State University with a degree in Marketing in 2001. 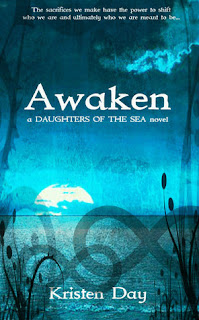 The sacrifices we make have the power to shift the very fabric of who we are, and ultimately who we are meant to be...

After learning of her true destiny as the intended Leader of the Tydes, Anastasia Whitman must now embark on a perilous quest to the Underworld before the age of eighteen in order to plant the seed of immortality and complete her essence to become a true Sea Goddess.  But before she can make her legendary journey, an unexpected new student transfers to Lorelei; initiating a sequence of events that will unravel Stasia’s new life, and test the boundaries of her relationship with the mysterious, dark, and sexy Finn Morrison.  The line between the Underworld and the Living begins to blur as gruesome ghosts, morbid reveries, and pure evil haunt her waking hours as well as her sanity.  Once the details of Finn’s own startling destiny are revealed, the dangerous secrets he’s been hiding will threaten the very love Stasia believed to be indestructible.  As time begins to run out, she will be forced to choose between the one she loves and the destiny she cannot escape.

Okay, I am stupidly torn about this novel. On one hand, I loved it just as much as I loved Forsaken - I liked the different characteristics of all the characters, the initial plot, the different powers, the mythical connections...but I also felt that the timing was off for this book. The events that I deemed unimportant went on for ages, and the bits I thought were important were only a chapter or two, max. Let me explain.

Awaken is a simple continuation from Forsaken. Stasia has found her destiny, and must make a journey to the Underworld to fulfill her essence and become rightful leader of the Tydes. However, combined with the fact she must do it before her 18th birthday and she doesn't know when that is, and the fact that her boyfriend, Finn, is going through his own dramatic change, a lot of things are hanging in the balance. And to make matters worse, enter Nadia - gorgeous, smart, and deadly - and she is going out of her way to make sure that Stasia doesn't complete her mission. But why?

As I said for the previous novel, the backstory for the entire trilogy is great. I've found it to be a bit of a mix between the Starcrossed trilogy, the Percy Jackson series, and the House of Night series. I say this because as I read the novel, I remembered parts of the mythical side of it from reading Starcrossed, it had the connection with the sea gods in Percy Jackson, and I found it had a structure much alike that of HoN. I think Day has made it so that it definitely appeals to teenagers who love fantasy, and because it is original there isn't the danger that someone has written about it before.

However, another feature it had in common with HoN, I didn't like so much - that being how annoying the main heroine is. A lot of people know that I really don't like Zoey Redbird - and now I really don't like Stasia. Here are some features that are similar and just as annoying: that fact that whenever Zoey spiritually grows, she gets some new wacky tattoo, which is the same for Stasia; one moment she is the dumbest scardy-cat on the face on the Earth, the next she's being all bold in the face of danger; she spends most of her time whinging about her boyfriend. She hasn't gotten to the point where she is as annoying as Zoey, but it sure is getting there, and I just wanted to punch her.

Aside from Stasia (stupid nickname, I've got to add) I adored the rest of the characters! Carmen, Willow and Phoebe are all so different, and I feel as if they represent all the different aspects a teenage girl's friends could have. I also found Finn just as sexy as last time - however, he seemed to have softened a bit. What appealed to me last time was how dark and dangerous he was, but now he's...sort of like Stasia's little lamb. Still hot, but not as great. However, I thought the best portrayed character was Nadia - she was evil and hatred coursed through her; whenever she was in a chapter, she made me shudder with fear, but I loved it anyway. I'd like to see more evil characters like her.

Lastly, I just want to quickly say something about the writing. It was good and easy to read, and I found myself finishing this book in no time. Day writes in such a way that everything flows smoothly. However, as I said earlier, I thought that some things - like Stasia's despair over Finn, and her going out to find her real birth date - took far too much of the novel up, whereas travelling to the Underworld took up, what, 10% of the book? It needed more, at least 30%, since that was the main goal of the tale. I also thought that far too many semicolons were used. As a writer myself, I've found that when I write for a while, I tend to use ; after every other sentence, and when I go back and reread it, I really how misplaced they are. I felt that Day didn't do this, and that the majority of the semicolons were used in the wrong context.

Overall, although I feel like I have complained a lot during this novel, I did enjoy it - not as much as Awaken, but I still really liked it. It is quick-paced and is written in such a way that it just flows smoothly. The plot and backstory are addictive, and I can't actually wait until the release of the final novel, Chosen - I want to know what happens next! If you want a copy of Awaken, hit up the giveaway below, or click on one of the links above.
Rating: 3/5

a Rafflecopter giveaway
Posted by Nina @ Project Read and Review at 14:14