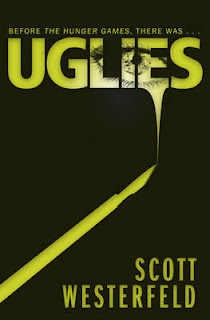 Tally can't wait to turn sixteen and become pretty. Sixteen is the magic number that brings a transformation from repellent Ugly into a stunningly attractive Pretty, and catapults you into a high-tech paradise where your only job is to have a really great time. In just a few weeks, Tally will be there.

But Tally's new friend, Shay, isn't sure she wants to be Pretty. She'd rather risk life on the outside. When Shay runs away, Tally learns about a whole new side of the Pretty world - and it isn't very pretty. The authorities offer Tally the worst choice she can imagine: find her friend and turn her in, or never turn Pretty at all. The choice Tally makes changes her world forever.

I have wanted to read this novel for ages, because although I have read a lot of the dystopian genre, I have never actually come across one that is so based around looks, which I find interesting. I had really high hopes for this book, after being told by several people how good it was - and it did not disappoint.

Uglies is based in a future USA, where an operation was created to transform teenagers, at the age of 16, from an Ugly into a Pretty. Tally cannot wait until this operation happens, and she is allowed to move out from Uglyville into New Pretty Town, where her best friend, Peris, is waiting for her. However, just before she is about to leave a problem turns up, and Tally finds herself struggling through the wilderness to find her friend, Shay, who has gone in search of the mysterious Smokies. But finding Shay isn't the only thing she discovers.

I'd first just like to say how much I love the concept of this novel! Plots for dystopian books are mainly based around the idea of society trying to control the population, whether that be through caste systems, wealth, and war. I don't think I've ever come across one that deals with beauty - I've come close, but not quite. I found it fascinating, seeing a glimpse at what our own corrupt ideas of beauty could turn into. In magazines, if we see anyone over a size 6, we start complaining; if anyone has a too big of a nose, or eyes too close together or too wide apart, abuse starts pouring out. But realistically, what would it be like if everyone looked pretty similar, aside from skin-tone and hair colour? Westerfeld explores this, and in a great  way, too.

I thought the pace of the novel was good. It was based over a series of months, yet with the way Westerfeld wrote, he didn't go on and on about unimportant days, boring the reader senseless - something was always happening, but not so quickly that you didn't really grasp what was going on. My only complaint was that some events, which I thought were quite important, weren't made much of a deal of - I don't want to post spoilers, but the whole of Part Three was extremely anticlimactic, when it should have been action-packed.

I did like the characters, however there was just something missing. Westerfeld characterized them very well, but I just felt like there was a wall blocking me from really getting under their skin. I'd heard a lot about David and how he was a heartthrob, but I just didn't feel very... excited by his character. To be honest, he was a bit dull - they all were, aside from Tally and Shay, which I just found disappointing. I don't know whether that was just me, but I couldn't connect with them.

Overall, although I didn't love the characters as much as I thought I would, I thought the concept was brilliant, and I can't wait to see more. Westerfeld's take on our ideas of beauty really is eye-opening, and he has brought it to life in such a unique story. If you love dystopian novels, you must add this to your TBR list.
Rating: 4/5
Posted by Nina @ Project Read and Review at 21:13