The Forsaken by Lisa Stasse 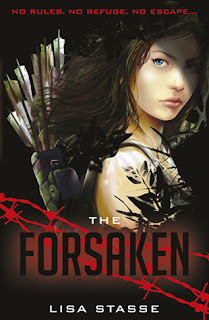 Alenna Shawcross is a sixteen-year-old orphan growing up in a police state formed from the ashes of Canada, the US and Mexico after a global economic meltdown.

But when she unexpectedly fails ‘the test’ - a government initiative which supposedly identifies teens destined to be criminals - she wakes up alone on a remote island reserved for the criminally insane.

Terrified and confused, she soon encounters a group of other teen survivors battling to stay alive, including Liam, a boy who will become her love... and her lifeline.

Soon Alenna makes the terrifying discovery that there’s more to the island (and her past) than she could ever have guessed... But who can she trust? And can she ever escape?

HATE!
I HAVE NOTHING BUT HATE FOR THIS BOOK!
I HAVE BECOME ILLITERATE!
I JUST I give up.


The blurb is completely misleading, it should just say "The Forsaken; a crap version of The Hunger Games." because that is literally all it is! The amount of parallels I can find within this book is crazy! If it was written before the dystopian craze, I would understand - but all Stasse has done is taken the idea from Suzanne Collins, and rewritten it blandly with annoying characters. WHY? WHY?!

AND LOOK AT THE FORSAKEN COVER! Is that not Katniss?! URGH.

Okay, alright, I am calm. Time for a proper review. I read The Hunger Games just over two years ago for the very first time, and I fell in love with it. From this, the dystopian genre has become more and more popular, and I will admit that I am a major fan of the genre in general - but I'm always on the look out for books that follow The Hunger Games closely, and this is by far the worst I've come across.

Although in my hate storm I've made it look like The Forsaken is an exact copy of THG, it isn't - and actually, the initial concept was good. Same-y, but good. However, the execution was poor, which I think was what led to this books ultimate downfall. Stasse didn't really explain anything in great detail - it was vaguely touched upon, before she got right into the action and the love (urgh!). Although I hate books with a slow start, there does need to be at least a little bit of plot build-up beforehand.

I think that maybe the characters in this book made me dislike this the most? Alenna. Oh, what can I say about Alenna? SHE IS A NAIVE, ANNOYING IDIOT! I wanted to shove her head continuously into a brick wall! She's fighting for her life on a flipping island and she spends most of her time obsessing over some blue-eyed boy! NO! JUST HELL TO THE NO, MAN!

Gedya, although I loved her fiesty attitude, was a crazy witch with a capital B! Maybe Stasse didn't intend it, but she came across as having some very bad anger issues, as well as bipolar - one minute she was all chummy with Alenna - then the next she was yelling at her, getting crazy paranoid over HER EX BOYFRIEND. She was insane. A lunatic! It was creepy and unbelievable and I just - WHY? Why would you ruin possibly the only tolerable character in the book? Le sigh.

There was also a heavy emphasis on the insta-love. I think this was the final straw, to be honest. I hate insta-love! In The Hunger Games, although Katniss and Peeta are frequently thrown together, their love slowly develops throughout the trilogy. But not with Alenna and Liam, no - a week or so together, and they are "in love". Liam apparently dies a week after she met him, and she is "heartbroken" and "depressed" and "wanting to give up" - STOP! She's fighting for her life and she is freaking depressed over some guy she's known for five minutes! She needs to get her priorities straight before I read through the book and whack her over the head with a saucepan, Rapunzel-style!

I'm too annoyed to even continue this review. It wasn't the worst book I have ever read - I skim-read the boring parts, but it wasn't as much of a struggle to finish as it could have been. But it definitely wasn't worth the read.
Rating: 2/5
Posted by Nina @ Project Read and Review at 19:37