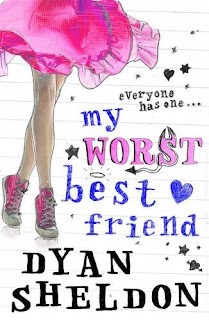 Gracie and Savannah are best friends - despite being totally different. Together they make a great if surprising team and it seems like nothing could come between them - but over a long summer Gracie begins to question Savannah's reliance on lies and manipulation to get her own way and wonder whether her friend is quite as confident as she seems.
I first picked this book up not because I have previously read a different book by Sheldon, but because I like the initial plot idea - it sounded like a typical coming-of-age novel about a teenage girl discovering who her true friends were. And at the end, I did feel a kind of satisfaction from reading it. But while I was reading it, I wasn't so keen. For one thing, I wanted to strangle Gracie's best friend, Savanna. She has to be one of my top five most annoying fiction-novel girls. I mean, for one thing, she said 'like' as many times as 'blood' is mentioned in Shakespeare's Macbeth (which is a lot, let me tell you). And it's a shame to say this, but my strong dislike for just one character really did spoil the rest of the book for me. But also, I don't think the actual plot was strong enough - I reckon that if Sheldon had developed the character of Gracie a bit more, it could have been really good - but half of the time, I just wanted to scream at her "Stick up for yourself, girl!". She is just so infuriatingly wimpy - there is practically zero confrontation with her, she lets Savanna walk all over her, and she has the personality of a haystack. The pair are more than 'totally different' - they are literally one end of the scale to the other. There was no in between, which made the novel really unstable. I'm not saying I hated it, but there wasn't anything remarkable or special about it - however, for what it's worth, I do have a bit of a soft spot for Sheldon's novels, and I have to say that, all-in-all, I did still like it.
Rating:3/5
Posted by Nina @ Project Read and Review at 11:00