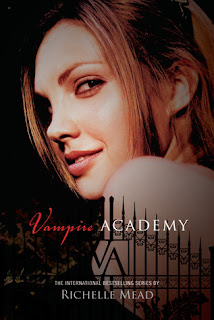 St. Vladimir’s Academy isn’t just any boarding school—it’s a hidden place where vampires are educated in the ways of magic and half-human teens train to protect them. Rose Hathaway is a Dhampir, a bodyguard for her best friend Lissa, a Moroi Vampire Princess. They’ve been on the run, but now they’re being dragged back to St. Vladimir’s—the very place where they’re most in danger...
Rose and Lissa become enmeshed in forbidden romance, the Academy’s ruthless social scene, and unspeakable nighttime rituals. But they must be careful lest the Strigoi—the world’s fiercest and most dangerous vampires—make Lissa one of them forever.

I'm still sat here reeling from the events in this novel. Oh my goodness. I took this book out from my school library in year seven, read a bit, and became completely confused - so I put it back without finishing it. But recently, everyone has been telling me to read it, from left, right and center, so eventually I caved in and got it back out. And I am so pleased I did. If you have not read this novel, get it now! Trust me when I say that it will greatly enhance your appreciation and enjoyment of vampire novels; it definitely improved it for me.

First off, the characters are brilliant.I'd say there are four main characters: Rose, Lissa, Christian and Dimitri. Each one of them has a really different personality, and I'm pretty confident that anyone, boy or girl, can relate to at least one aspect from one of them, minimum. I especially liked Rose. I found that she was the kind of main character I always hope novels will have; she smart, she's quick-witted, she isn't afraid of confrontation, and she keeps the book going. I really have to congratulate Mead - even though certain bits weren't always fast-paced and exciting, they still weren't boring, Mead managed to keep the pace at a continually high level, and matched the exciting moments and more peaceful moments evenly.

Secondly, the plot. The plot was brilliant. Admittedly, I didn't quite understand what was going on at the beginning - the blurb pretty much tells you what happens at the beginning of the book, so I was just sat there wondering whether they were back at the Academy or still on the run. However, what was happening quickly became apparent, and I got into the flow of the novel easily. Also, I thought each of the surprising moments placed throughout the novel were brilliant - I never suspected a thing, not even for a minute, so when they came to light, I was really shocked. The unpredictability of it really worked well, and I found myself heavily enjoying it. When I say it was addictive, I mean it was stupidly addictive.

Overall, I really enjoyed this novel, and I cannot believe I didn't read it fully sooner. Richelle Mead is an amazing author, who not only has a brilliant writing talent, but is very imaginative, and I am so in awe of her for being able to think up something as awesome as this. I definitely recommend it; you will love the witty characters and the amazing plot, and I can promise that even if you aren't a major fan of vampires, you will be after this.
Rating: 5/5
Posted by Nina @ Project Read and Review at 18:20