I Am Number Four by Pittacus Lore 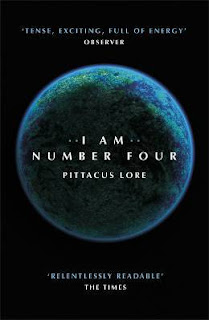 Nine of us came here. We look like you. We talk like you. We live among you. Bue we are not you. We can do things you dream of doing. We have powers you dream of having. We are stronger and faster than anything you have ever seen. We are the superheroes you worship in movies and comic books - but we are real.
Our plan was to grow, and train, and become strong, and become one, and fight them. But they found us and started hunting us first. Now all of us are running. Spending our lives in shadows, in places where no one would look, blending in. We have lived among you without you knowing.
But they know.
They caught Number One in Malaysia.
Number Two in England.
And Number Three in Kenya.
They killed them all.
I am Number Four.
I am next

I have had this book sat on my shelf for about a year - and now I'm sat here wondering why the heck didn't I get around to this sooner? I know I've had it set as 'currently reading' for about a week, but I only properly started it about two or three days ago - and man, is it addictive! It's sad to say that I originally bought the book because I wanted to watch the film (I mean, Alex Pettyfer and Diana Agron? Yes please!) and I always like to read the novels beforehand. Now I'm worried that even with the amazing actors, it still won't live up to this! It is my really my first ever properly sci-fi alien book - and I think I'm hooked now! Even if i doesn't sound like your kind of thing, you really must give it a try - I haven't met anyone to this day that didn't love it.

I don't want to give any spoilers away, but you need a bit of background history to even understand this review. The whole story plot is based around there being two other inhabited planets besides Earth; Mogadore and Lorien. The Mogadorian's invade Lorien for their resources, killing everyone on the planet - aside from 9 children and their "carers", otherwise known as Cêpan, who are sent to Earth to be raised and to develop their abilities - also known as Legacies - so they can fight back against the Mogadorian's and to take back Lorien. Admittedly, my explanation is confusing, but I promise you that the book explains it perfectly. Anyway, the Mogadorian's found the Lorien's on Earth, and are now tracking them down - except they can only kill the nine of them in order. And as it said in the synopsis - the first three have been killed, and now they are on the hunt for Four, who is hiding under the false identity of John Smith.

Firstly, I think the backstory is brilliant, and without double-checking I know that there is no other novel out there like this. The idea is totally unique, and I'm genuinely intrigued to find out where Lore came up with this - I say Lore, when Pittacus isn't actually the author of this. I found that another great touch - Pittacus Lore is one of the leaders of Lorien, so it's implied that he's documenting what is happening. The real authors are in fact James Frey and Jobie Hughes - and I really take my hat off to them...even though I'm not currently wearing a hat. The concept is just brilliant - personally, I've always wondered if there are other creatures out there like us - I mean, who doesn't? The Universe is huge, so it doesn't seem impossible. Frey and Hughes have taken this unanswered question and turned it into a novel so convincing, I genuinely wonder whether it is possible.

Aside from the background story, I loved the sub-story surrounding Four and Henri. I found all of the characters amazingly realistic, despite most of them being alien. The way Frey and Hughes wrote it, you could sympathize with Four - he is constantly moved around, not having time to make lasting relationships with people, and he always has to hide who he is. Although it isn't necessarily in the same context, a lot of young adult readers have felt like this too - and that's what firstly begins to create the connection so the reader is able to relate to him and his story.I liked the different friendships that were formed during the novel, and I have seen a few reviews where people thought the relationships and interactions weren't realistic enough - and admittedly, some of it did seem a bit fast-paced, especially the action sequences, but I didn't find it unbelievable - after all, they're aliens! It is supposed to be a bit confusing and different.

I feel like this review hasn't made much sense - I suppose I'm still reeling from how amazing it is - but I genuinely think this is one of the best books I have read in quite a few months. It is just so totally different from anything else that I've read - and as I said earlier, even if sci-fi isn't really your thing, you should still give it ago. Although it is based around space, this novel is about a lot more than that. I have a few book that I need to read within the next few weeks, but I have The Power of Six - the sequel to I Am Number Four - sitting on my shelf, so watch this space for the review coming soon.
Rating: 5/5
Posted by Nina @ Project Read and Review at 22:19