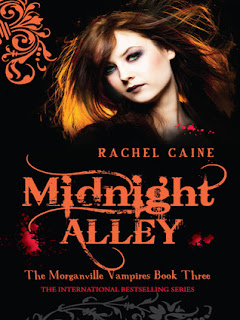 
When Claire Danvers learnt that her college town was run by vampires, she did what any intelligent, self-preserving student would do: she applied for a transfer and stocked up on garlic. The transfer is no longer an option, but that garlic may come in handy.

Now Claire has pledged herself to Amelie, the most powerful vampire in town. The protection her contract secures does little to reassure her friends. All of a sudden, people are turning up dead, a stalker resurfaces from Claire’s past, and an ancient bloodsucker extends a chilling invitation for private lessons in his secluded home.


I still can't believe it has taken me for twelve of these books to be published to finally get my act together and  read it. The Morganville series follows Claire Danvers, your average (ish) teenage girl who gets sent away to college - in a town full of vampires. Yeah, that's a plot twist if ever I heard one! In this installment, Claire finds herself doing Amelie's bidding, which consists of working for an old vampire called Myrnin, who just so happens to be off his rocker. Of course, in the background, you have Eve's creepy younger brother lurking about, the horrible vampire Oliver, and Queen of Mean Monica - of course it is a recipe for disaster.

Can I just start by saying that Caine has a natural talent for creating hot vampires? Aside from Oliver, all of them seem to be like gods. I especially love Myrnin - I just found his overall personality endearing, despite the fact he's highly dangerous. In fact, I just love all the characters in general. It's been three books now, and most of the characters seem to have the same personalities as they did to begin with - of course, some have changed slightly, but for the most part, they are believably realistic. Ignoring their vampire-ness, of course.

Now, I don't know whether this is a good thing or a bad thing, but I can see why there are twelve books, and the series has yet to finish. Everyone knows that I love a good series - but when it goes on for over six books (not counting amazing series like Harry Potter), I start to get tired. These novels, although quite a decent size, really don't have anything much going on in them. I want to write a good length review on it, but I honestly could sum up all almost-400 pages in a sentence. For me, the whole story just needs much more action, and I'm hoping as it continues it will get better and better. From the star-ratings I've seen, it does, so fingers crossed!

I have to say, one thing I really do marvel about this novel is the fact that it is a great idea. Morganville is basically a town built to host vampires, from the underground garages, to Founder houses, to the tinted car windows. It's a pretty awesome concept, and I love how Caine has taken the old idea of vampires, and has changed and evolved it into something that can fit around modern times. She's created this whole world, and that takes an awful lot of imagination to do. Although I'm not sure abot the series length, I am going to continue into it - I want to see if Myrnin makes another appearance! If you love vampires, go and get the first installment, Glass Houses, now!
Rating: 4/5
Posted by Nina @ Project Read and Review at 13:28