Fifty Shades of Grey by E.L.James 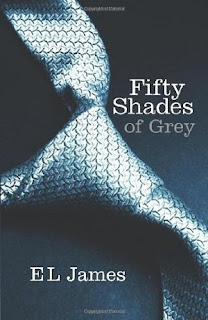 
When literature student Anastasia Steele interviews successful entrepreneur Christian Grey, she finds him very attractive and deeply intimidating. Convinced that their meeting went badly, she tries to put him out of her mind - until he turns up at the store where she works part-time, and invites her out.

Unworldly and innocent, Ana is shocked to find she wants this man. And, when he warns her to keep her distance, it only makes her want him more.

But Grey is tormented by inner demons, and consumed by the need to control. As they embark on a passionate love affair, Ana discovers more about her own desires, as well as the dark secrets Grey keeps hidden way from public view.


I feel like I need some kind of award for having finished this book. It's been sat on my shelf all summer, and if I'm being honest, I was avoiding reading it because I had a nagging voice in my head saying, What if you like it? What if you really enjoy it, and you become one of the people who can't get enough of it? It's fair enough to say that my worries were silly - there is no way on Earth that I would ever like a novel like this. Please prepare yourself for the rant of a lifetime.


For those of you who don't know what the Fifty Shades trilogy is about, it basically follows Ana Steele as she falls hopelessly in love with Christian Grey, who of course has had a weird upbringing and loves to tie people from ceilings and hit them. It was also originally a Twilight fanfiction, which I think was a definite foreshadowing of how rubbish this would be. Although the author has gone back and edited it so it is completely her own novel, the Twilight in it is still easy to spot, and I found myself picking out which character was which - yes, I used to be a Twilight fangirl. When I was twelve. And now I detest it, a lot.

Let's start with what was wrong with it (I'm not going to be annoying and write down 'everything' - I'll give you some details.) Firstly, it is as if James chose an adjective, grabbed a thesaurus and replaced it with a word that no one uses in every day speak. For example, 'equilibrium' meaning 'balance'. I counted that she used it a total of five times - not much for a novel with over 500 pages in total, but it constantly seemed to be out of context - it just didn't fit in anywhere, and I honestly don't know why she kept using it. At one point, during one of their thousands of email exchanges, Ana actually writes (and I quote!) "Have you been playing with the thesaurus again?". This is a question I am sure most people want to ask James. I don't know whether she was trying to add all these fancy words in to make the novel seem all posh and well-written, but it didn't work. It's erotic fiction, and no amount of frilly words can change that.

Now I know this review will get mixed reactions, and I'm sure a few of you will be thinking, But you're only fifteen - you don't understand these emotions. Yes, whilst I am young, I haven't lived under a rock my whole life, and I can understand that these feelings of attraction that you can develop. But really? Did the pair have to have sex constantly? Every other page there were getting it on, as it were, and after the first two times, I was just sat there thinking, Are they seriously doing this AGAIN? Considering Ana is supposedly a massive virgin, and that it is supposedly quite difficult to get a girl to orgasm, she seems to be having five in every chapter. Strange, isn't it? It's a well-known fact that guys can't have multiple climaxes, whereas girls can - but hey, maybe Grey was hiding a secret from Ana, and maybe he is really a woman? It sure seemed like it, from all the soppy stuff he wrote. It was sickening - they've known each other, what, a few weeks? And he's practically declaring his love for her, when he also says he is a very closed person and doesn't trust people easily. It's like he has several different personalities all at once! And you know what, that doesn't surprise me, considering his mood swings are amazing. One moment he is all playful, and in those moments I didn't mind him too much - and then literally the next second, he is all brooding and dark! And then immediately back again! It was so confusing, I can't even properly write down my pure exasperation! And again, the former Twilight fan in me could see how James had tried to characterize the Edward Cullen in him - but even Edward wasn't that bad. Heck, he even takes it one step further than Cullen (even though this is something you would expect from a VAMPIRE) and he decides that they must have sexy time whilst it is her time of the month - I'd go into more detail than this, but I like to think of this blog as PG-13 at the very least, so I won't divulge into it. But let's just say that there are lines you do not cross, and by even considering writing something like that down, James has just jumped over it.

However, I must give James some credit. She really did manage to capture Kristin Stewart's breathing patterns in Ana's character. I swear every other second it was 'I let out a gasp', then 'my breath quickens', then 'I try to control my erratic pants' - I'm surprised she didn't black-out from how strange her breathing pattern was! There is only so much detail you can put into about one's breathing, and James overdid it. However, a lot of fanfictions are like that - novice writers just posting stuff for other people's enjoyment. Online, that is absolutely fine. But when you go as far as to change it into your own story and then PUBLISH IT?! No. In all honesty, it isn't the worst written fanfiction I have ever read - and for a fanfiction, it is good. But for an actually published novel, it is appalling, and I guess a lot of us future-authors are sighing with relief - if this can get published, surely we can get a piece of work published, too?

That was harsh. But it's the honest truth. Have I yet to mention her 'inner goddess'? Well, I want to smack this inner goddess in her face - and I'm not a violent person. She practically mentions her every other page, and I can't help but sit there and think, Shut the heck up, no one cares. I don't care whether you are waving cheerleading pom-poms around at the fact that you've gotten this mad-man all angry again. Is that masochistic or what? She constantly whines about being smacked (though if she doesn't want to be, why is she involving herself with a guy who is into BDSM?) she always goes out of her way to rile him up. It's like she takes one step forwards and then takes a hundred steps back! You'd think that as the novel went on she would learn, but nope, she doesn't. It's like talking to a brick wall.

And even though all the above riled me, this was the worst of all: Grey's obsession with Ana's eating habits. The lady isn't hungry, she doesn't want to eat - and he turns into some huge hulking great big monster and demands she cleans a whole plate of rich food! It's like he's that witch from Hanzel and Gretel, and is trying to fatten her up so he can eat her. It is honestly frightening, with the intensity of how much he wants her to eat. And then we get onto her biting her lip - a habit I know for sure that I have myself. Every time she does this, mostly unconsciously, he gets into a full-on rage with her, telling her how much it turns him on so she should stop doing it. Yes, it is just a little detail, but she seems to constantly be chewing on that lip so much that I wouldn't be surprised to find out she'd bitten it clean off! She is so oblivious and naive, and he is so controlling, it is sickening to read. It physically makes me cringe, and I honestly hope that any sane person wouldn't walk straight into his arms, no matter how "handsome" or "rich" he is. He says in one email that Ana has all the power, and I suppose in a way, she does. But this book isn't about women having power - it's about a woman being dominated by a man, beaten for putting one toe out of line. And it scares me how many women are buying into this franchise. We've already had a revolution to give women the power of speech - surely we're not going to shrink away from that? I know I'm being melodramatic, but it's sickening to think that women would rather read this than, say, To Kill A Mockingbird - a book which has kept me sane throughout reading this.

I must give James some credit though. She is a housewife, and she created a story that has sold thousands worldwide. In a blink of an eye, she's rich and famous, and you can't walk into a bookstore without the Fifty Shades trilogy being there. That is an accomplishment. And admittedly, I did like a bit of the book - I found the email subject titles funny. However, that was honestly the only thing I did like. I was talking to some of my mum's friends about this book, and they said it was a purely escapist novel, aimed at older women who just want to escape from their lives for a while. And I raise my hat to James for giving that to them. But I still can't help thinking that out of all the amazing novels I have read, why is this one the one that is known by millions? I find it kind of sad. Back in my gran's day, Lolita was unacceptable, and yet now many of us are buying into Fifty Shades. A lot can change in under 100 years. It's quite scary.

In all honesty, if you value your time and money, just avoid this novel. I wanted to avoid it, but because I was curious - and because I wanted to have my own opinion on it - I read it, and have therefore wasted three days of my life. I guess you could say I did read it quickly - but I can assure you that was only because I wanted it out of the way, as soon as possible. After a chapter, I was ready to DNF it - but I needed to write this review. It's safe to say that I am never going to read the next two installments, even if you paid me. The novel summed up in an image?