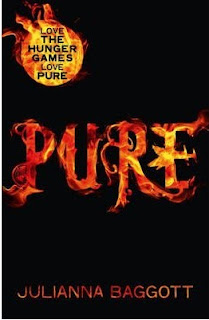 We know you are here, our brothers and sisters . . .
Pressia barely remembers the Detonations or much about life during the Before. In her sleeping cabinet behind the rubble of an old barbershop where she lives with her grandfather, she thinks about what is lost--how the world went from amusement parks, movie theaters, birthday parties, fathers and mothers . . . to ash and dust, scars, permanent burns, and fused, damaged bodies. And now, at an age when everyone is required to turn themselves over to the militia to either be trained as a soldier or, if they are too damaged and weak, to be used as live targets, Pressia can no longer pretend to be small. Pressia is on the run.
Burn a Pure and Breathe the Ash . . .
There are those who escaped the apocalypse unmarked: Pures. They are tucked safely inside the Dome that protects their healthy, superior bodies. Yet Partridge, whose father is one of the most influential men in the Dome, feels isolated and lonely. Different. He thinks about loss--maybe just because his family is broken; his father is emotionally distant; his brother killed himself; and his mother never made it inside their shelter. Or maybe it's his claustrophobia: his feeling that this Dome has become a swaddling of intensely rigid order. So when a slipped phrase suggests his mother might still be alive, Partridge risks his life to leave the Dome to find her.
When Pressia meets Partridge, their worlds shatter all over again.


It's like The Hunger Games, they said...it would be good, they said...Wrong! You'd think if a book was allowed to put "Love The Hunger Games, Love This" on the cover, it would be at least good, if not amazing. But this...the premise was brilliant, but it was just written in the completely wrong way. What could have been a brilliant book turned out to be pretty boring, and this took me a week to finish! Usually I could read books this length in about three to four days. But with this I just didn't feel motivated to finish it. Not enough to not finish it, but it was close!

The back-story to the novel is that Detonation's were set off all over the world, destroying whole cities in a matter of seconds. Most people died, and the few that survived are now fused to objects they were surrounded by at the time of the bombings; animals, pieces of glass and metal, toys, electrical items, and even people. However, just before the bombs hit, a Dome was built, storing rich families inside to keep them safe. They are Pures, and are being worked upon to become a kind of superhuman race to rule over those who are fused to the landscape.

See, I thought that sounded interesting - a bit darker than The Hunger Games, but it still followed the lines of poverty and a separation between two different classes. However, it was way more gruesome. Some of you will probably love that about the book, but it literally made me shiver. Baggott just went into details that I just didn't want to know about - especially when she talked about mother's being fused to their children. It was hard-hitting, I'll give her that much. Unfortunately, the rest of the novel was not so emotion-inducing, if you catch my drift.

I think the major downfall for this novel was that there didn't seem to be a plot for about 300 pages. I was just reading it thinking, Okay, this has happened, so where is it going? Truthfully, most of it lead to no where, and was soon forgotten. You didn't need about half of this book, and the outcome would still have been the same - except I wouldn't have been as annoyed and disappointed once finishing it. Admittedly, a plot did seem to be forming towards the last fifty pages or so - a few things started to click together, but all I could think was too little, too late. A book needs a beginning, middle and an end, and must have a plot throughout it. Pure was basically people escaping the Dome, going back to the Dome, escaping, going back, and so on - they were literally running around in circles. There were also far too many different people's POV's. Two or three I can keep up with - but when you have about six or seven, it is just too much to handle! And I swear the only plot twists there seemed to be was presumably dead people being alive, and then dying again. Even the little couples forming weren't that great - for example, one minute Pressia decided that she hated Bradwell, the next minute she was falling into his arms like some lovesick lamb! There was no gradual forming of a relationship; it was just like Baggott realized there wasn't anything interesting happening, so she just threw them together.

Now, I guess I've written a pretty harsh review, and I will say that Baggott has a very good writing style, with a lot of easy descriptions that don't go on forever and get irritating. Although I felt she didn't push the character's personalities out much, they weren't annoying, and I found myself warming to them as much as possible, which admittedly wasn't much. It was like there was film covering the characters, or a mesh fence - you could see them vaguely, but not deep enough to cry if they were killed off. I really hope in the next novel that Baggott will improve on the characters and will really bring them out of their shells - it would do the series a whole lot of good.

Overall, I think that what I'm most annoyed about is how amazing it should have been. I feel thoroughly disappointed, and any book that boasts about it being the new Hunger Games really should at least be half as good. Pure doesn't deserve that title. So if you're looking for a dystopian novel alike to The Hunger Games, you could give this a try, but I don't think I'd recommend it. However, from what I've seen over Goodreads, the ratings vary quite a bit, so who knows, maybe it is your cup of tea after all? The next installment, Fused, is set to be released next year. It's safe to say that I will not be reading it.
Rating: 2/5
Posted by Nina @ Project Read and Review at 17:52