As soon as I heard about this book, I knew I had to read it. So when the opportunity arose to participate in the blog tour, I just couldn't turn it down! And it turns out I'll be kicking it off too - so let's start this tour with a bang!

Debbie Dee recently moved to southern Idaho with her husband and three children where she is learning how to be a country girl in her favorite pair of blue heels. She adores fairy tales and happy endings, but secretly crushes on the bad guy now and then. As a dedicated musician who practices way too much, she never expected writing would sweep her off her feet until she jotted down a scene from a daydream, which turned into two scenes, which turned into a messy house and her first novel. Since then she hasn't been able to let a day go by without writing. Her website is www.debbiedee.com. 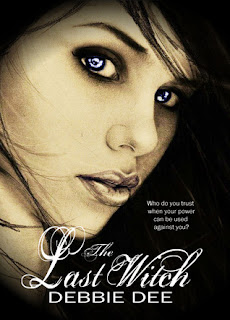 
For generations the Incenaga Witches have been forced to use their power to fulfill the wishes of others until they are drained of their magic and left to die. Desperate to protect his infant daughter - the last surviving witch - Emmeline’s father escapes with her to the forests where he vows to keep her hidden from the world and from the truth.

Sixteen years later, Emmeline is discovered and finds herself in the grip of a traitor who will stop at nothing to get what he wants, even if it means abusing her power until she dies. As she fights to regain her freedom she is faced with a choice between a prince who offers a lifetime of security and a common gamekeeper who has no idea of her power, but offers his heart.

But who can she trust when her power can be used against her?


Now I am a big fan of paranormal novels, yet I have never come across such an original concept surrounding witches. Thinking about it, there are a lot of paranormal novels surrounding vampires and zombies and other supernatural beings - but there isn't such a broad range around witches and wizards. Yes, there's Harry Potter - but I'm talking about supernatural novels that particularly appeal to young adult girls. However this definitely does.


The story follows Emmeline as she is captured and brought to a castle against her will, where she is told she will be married to the Crown Prince, who is out on a hunting trip. So she is on her own, left to come to terms with supposedly being the last witch of her kind. However, because of the immense power she holds, a lot of people want to capture her and abuse her power - and with the prince nowhere to be found, she is left to be protected by a handsome gamekeeper who is oblivious to her secret.

I have to start with saying I loved the pace of the novel. It seems like such a little thing, but really, the pace of a novel can change how good or bad it is. You don't want the topic to change very quickly, but you don't want it to drag on for so long that you become bored. The story was situated over quite a few long months, yet Dee wrote it so that the tale didn't recount each and every day - it highlighted the important parts, while still describing Emmeline's overall situation. Like I said, it is such a small detail, but it does really making a difference.

I think this novel's main strength is the storyline. It is a completely new and unique topic, and I was intrigued from the very beginning. The idea of drawing power from fire was interesting, and the fact that Emmeline was the last witch, yet knew so little, also meant that a lot of opportunities were left open. Although not a great deal happened overall in this novel, I'm thinking the next two installments of this trilogy will definitely explore the different possibilities, and I cannot wait to find out more.

Lastly, I need to talk about the characters. Personally, I loved them. Emmeline did have her irritating moments, but on the whole, I did really like her. I found her to be a very strong and brave heroine, and I personally found I could relate to her in some ways. It's very important in a novel for the characters to be relate-able  no matter how realistic or far-fetched the story is supposed to be, and I thought Dee did an excellent job of characterizing them in such a good way. I was also very impressed with the characters of Malon and Weldon, who was both terrifying and fascinating. And last but never least, I adored Erick. I even think I developed a bit of a book crush on him! He was just your typical, lovable hero, and I just loved him. For me, he was the best character.


With a unique and enticing synopsis, I was already drawn to The Last Witch before I'd turned to the first page. I had a lot of high expectations for this novel, and it definitely lived up to it. If you love paranormal fantasy novels, I think this will be right up your street. I really hope the next installment to this trilogy is out soon - I don't think I'll be able to stand a long wait!
Rating: 4/5
Posted by Nina @ Project Read and Review at 13:07