Why We Broke Up by David Handler 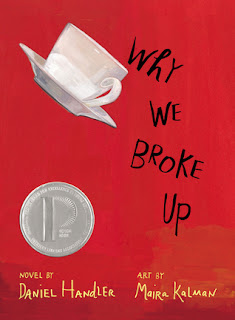 
I'm telling you why we broke up, Ed. I'm writing it in this letter, the whole truth of why it happened.

Min Green and Ed Slaterton are breaking up, so Min is writing Ed a letter and giving him a box. Inside the box is why they broke up. Two bottle caps, a movie ticket, a folded note, a box of matches, a protractor, books, a toy truck, a pair of ugly earrings, a comb from a motel room, and every other item collected over the course of a giddy, intimate, heartbreaking relationship. Item after item is illustrated and accounted for, and then the box, like a girlfriend, will be dumped.

I'm at odds with this novel, I truly am. On one hand, I want to rave about how much Handler engages with teenage readers, because he based the story off of some of his own break-ups. But then again, I also want to say how despite the excellent premise, his style of writing just didn't click with me.

Why We Broke Up is basically a long letter from high school sophomore Min Green to her senior ex-boyfriend Ed Slaterton, explaining why they broke up. Along with it, she sends him a box, which is full of seemingly meaningless items that she collected over the span of their relationship. As she goes through the different items, she writes a bit more of their story, detailing how they acquired each and every item.

As I said before, the summary sounded excellent right from the start. Loads of authors write novels about childhood break-ups, but none like this. What first drew me to the book, aside from the synopsis, was the fact that it's illustrated! I suppose it's a bit childish to like illustrations, but I love it when a book has a few, simple, beautiful ones - and these definitely are gorgeous. I thought it was a unique touch to start every chapter, or section of the letter, with a new picture.

I also liked how it wasn't your every-day happily-ever-after story. You knew they were going to break up, and the story of their relationship was just like most other teenager's; you meet, you get to know one another, you fall in love, you get heartbroken. There's at least one part of their story that a variety of readers can relate to, no matter what age you are. And as I read it, I have to admit that I fell in love with Ed alongside Min - and grew to hate him after what he did. It's pretty amazing skill to be able to evoke emotions from the reader like that, but Handler succeeded.

However, although I could relate to it easily, I just couldn't stand the writing. I tried reading Lemony Snicket's books two years ago (Lemony Snicket being a pen name of Handler), and I got to the third book and couldn't stand it anymore. I don't know whether  that's because I was fourteen and found his patronizing tone stupidly annoying, or the fact that he tries too hard to make his novels quirky and different. Luckily, in this novel he wasn't that patronizing, but did he heck try and make it quirky. With sentences that overused commas and went on for pages, and with both Min the 'different' one, and Ed the typical jock, tailing off mid-sentence, it was really irritating. With Min, I could understand, because she was always meant to be that unique, individual, arty one. But Ed? Handler wanted him to be the stereotypical, pretty dumb, high school jock. I can say as a fact that stereotypical and dumb basketball players do not talk like some loved-up, weird, old-movie-obsessed school girl. I think that was the big mistake that Handler made, which is why my overall star-rating won't be so great.

Although I liked the storyline, the characters annoying personalities and the way Handler portrayed them just didn't do anything for me. The story had so much potential, and I just thought that one thing let it down slightly. But nevertheless, I still thought it was a great story, and that the initial idea was wonderful. I think it's a great novel for every teenage girl and guy that has experienced a break-up of some kind. If you want to read some other break-up stories, or even post your own, visit whywebrokeupproject.com.
Rating: 3/5
Posted by Nina @ Project Read and Review at 11:42