I Am The Messenger by Markus Zusak 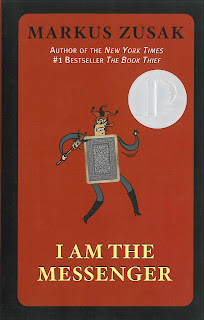 Meet Ed Kennedy—underage cabdriver, pathetic cardplayer, and useless at romance. He lives in a shack with his coffee-addicted dog, the Doorman, and he’s hopelessly in love with his best friend, Audrey. His life is one of peaceful routine and incompetence, until he inadvertently stops a bank robbery. That’s when the first Ace arrives. That’s when Ed becomes the messenger...

Chosen to care, he makes his way through town helping and hurting (when necessary), until only one question remains: Who’s behind Ed’s mission?

After reading The Book Thief, I've been the look out for more books by Zusak - and I pretty much immediately stumbled upon this. Although I wasn't as drawn to the premise as I was with his other work, I was curious, so I thought why not?

I Am The Messenger is a bit of a confusing novel to explain. After a bank robbery, the main character Ed is sent four Aces from a pack of playing cards. Each has a name, address or clue about someone he has to talk to, and something he has to do. He's a bit of an avenger/assassin/Robin Hood kind of guy. However, whoever is sending him the messages is unknown - and as it builds up to its climax, Ed starts to guess who it might be.

Firstly, I loved Zusak's structure of writing - it was easy to read and playful. Some authors seem to try and write as if it's a great 20th century literary piece. Zusak doesn't try to do it. He writes how he wants to write, and you can tell through his words that the story isn't forced. I think that's what firstly makes his books so accessible.

The plot, although a bit confusing at times, was very thick, and there were a lot of different aspects to consider throughout it. Zusak had me constantly on-edge - there is always an unanswered question, and even at the end there were still a few questions I guess I'll never know the answer to. But I don't feel unsatisfied by the ending. I really liked all the different tasks Ed was set - some of them were pretty straight-forward, but others had a bit more depth to them. I thought the problems and solutions Zusak created were amazing.

I also loved the characterization - I'm starting to think that this is one of Zusak's greatest skills. I'm not saying that I fell in love with each and every one of them, but he managed to create it so that you loved the characters that you were supposed to like, and hated the ones you were supposed to dislike. I also found them all really realistic. They were just like your average, every-day human being. In some cases, I'd find it a bit annoying - I'd want the characters to stand out for a reason, and we'd find out why. But with this novel, it just suited it perfectly.Throughout the story, you felt like this could happen to everyone, despite how unrealistic some of the situations seemed to be.

Although I wouldn't consider it to be as mind-blowingly amazing as The Book Thief, I do think that Zusak has turned into one of my favourite authors. He has a unique way of writing, and I'm pretty sure that any book he has or will ever write will be great, no matter from who's point of view, or what topic. He has such a talent, and if you haven't read a book by him, you really must pick one up. You will not regret it, trust me.
Rating: 4/5
Posted by Nina @ Project Read and Review at 19:08