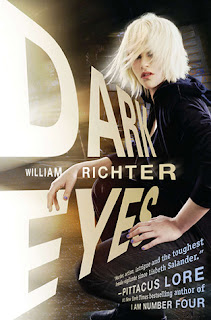 Dark Eyes is The Girl with the Dragon Tattoo for teens. Perfect for fans of Stieg Larson and Sophie McKenzie, it's an adrenaline-pumping and epic crime thriller with a dramatic personal mystery at its heart.

Born in Russia but adopted by a wealthy American family as a baby, Wallis Stoneman was brought up in a world of glamorous luxury. Then at the age of sixteen, beautiful and rebellious Wallis rejects the life that doesn't feel like her own and lives as a street-kid on the gritty streets of New York.

But the streets throw up more than she bargained for and she discovers a deadly secret to her past that will change Wallis' life forever. Her real father is a terrifyingly dangerous Russian gangster. And he is on the hunt for her mother. He will stop at nothing and no one - even his own blood - to find her.

Can Wallis find her mother before her father kills them both?

As soon as I read the synopsis for Dark Eyes, I knew I would love it. Russians, badass heroine and a big fat mystery? Um, yes please! Many have said this is a younger version of The Girl With The Dragon Tattoo - I can't compare, because although it's sat on the shelf next to me, I have yet to read it (oops!) But if that is anything as good as this read, then I'd better pick it up soon.

Wally has never known who her real mother and father were. Adopted at the age of five and brought to America to live with a new family, Wally has always wondered what drove her parents to leaving her - so when the oppurtunity to find her mother arises, how can she say no? However, her parentage isn't exactly what she pictured - it turns out that her escaped-convict father is also looking for her allusive mother. It's a race against the clock - if he finds her before Wally does, she fears she will never find the answers she's looking for.

When I heard that the author, William Richter, was a Hollywood screenwriter, I instantly got my hopes up. We all know those typical Russian gangster movies, right? Violence, drugs, violence, actions, violence, etc.- and that's pretty much what we got! The book had a brilliant fast-pace, and Richter wrote it as if you were battling through the mystery alongside Wally, not just reading it. He never focused too much on the surroundings or appearances, instead concentrating on the action side of things. I was engrossed from the very first page.

The character's also lived up to my expectations. Wally - despite the kind of silly nickname - was actually really badass. She reminded me of a young Natalia Romanova (DC's Black Widow, anyone?); feisty,  daring, and ready for a fight at any moment. Klesko, the bad guy, also matched my stereotype - he was big, bad, and actually sent shudders down my spine. He is probably one of the best baddies I have ever come across!

I loved the mystery of it all, trying to guess who Wally's mother was. We were told - SPOILER ALERT! - pretty early on that her mother was someone she knew - so from then on, it was like an interrogation of every female character. And when I found out who it was - well, she was about the last one I would suspect! At one point I did wonder, but I thought maybe that was too obvious - thing is, it wasn't obvious. It was obvious but no one thought it would be that so it wasn't obvious and gah I can't explain it but it was fantastic!

It was like reading a blockbuster, to be honest. I adored the fast-paced action, the intense thrill, the unanswered mystery, and I honestly couldn't get enough of it. If you love crime novels and love thrillers, then go out and get this now!
Rating: 4/5
Posted by Nina @ Project Read and Review at 19:59