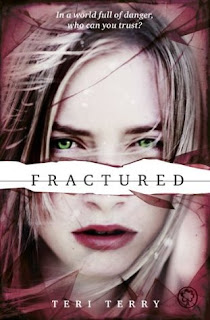 How do you know where to go when you don't remember where you came from?

Kyla's memory has been erased,
her personality wiped blank,
her memories lost for ever.

Or so she thought.

Kyla shouldn't be able to remember anything. But she can - and she's beginning to realise that there are a lot of dark secrets locked away in her memories. When a mysterious man from her past comes back into her life, she thinks she's on her way to finding the truth. But the more she learns about her history, the more confusing her future becomes...

After the first book, I was a bit hesitant as to what this one would be like - the concept excited me, but the delivery wasn't as good as it could have been. Fractured is definitely not that dreaded middle-book. Although it had a slow start, the pace quickly picked up, and soon after I started, I just couldn't put it down.

Set in a future England, anyone potentially threatening under the age of sixteen is Slated; their memories are wiped clean, and they are given over to a new family and a new life which they must try and adjust to. Kyla was Slated, but in her dreams, all too-real memories began to come to light, and the wipe on her memory began to fracture.

Kyla's characterisation was vastly improved - in Slated, I'd found her quite weak and forgettable, especially for the main character. In Fractured, she became much more dependent and strong, showing her feisty and badass side, which I loved. Terry also revealed a lot more of her background, which I think should have happened in Slated, because it explained a lot of the things that I, at first, did not like about her.

However, the thing that still bothered me was how gorgeous and great she was. I swear every male character was in love with her - all of them wanted to hang out with her and throw themselves at her feet and kiss her and jeez, I just got to the point where I gave up. My most hated fictional character is Zoey Redbird of the HoN series, who is the queen of attention from boys. Kyla is a very close second, and it's driving me insane. One love interest? Great! Love triangle? Interesting! A gazillion boys at once? NO. THANK. YOU.

The plot was a lot better, too. It still held that element of mystery, but everything was eventually revealed and made sense. In Slated, all the build-up lead up to a cliffhanger - a really annoying one. The build-up in Fractured led up to a climax and revelation.

On a whole, Fractured was much more consistent, and Terry managed to deliver a book that held all the hopes I'd had for Slated, and much more. For a dystopian series, this trilogy is getting more exciting with each book, and I can't wait for the final instalment.
Rating: 3/5
Posted by Nina @ Project Read and Review at 15:19