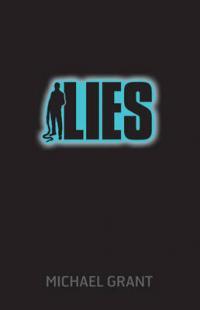 It happens in one night: a girl who died now walks among the living, Zil and the Human Crew set fire to Perdido Beach, and amid the flames and smoke, Sam sees the figure of the boy he fears the most - Drake. But Sam and Caine defeated him along with the Darkness - or so they thought. As Perdido Beach burns, battles rage: Astrid against the Town Council; the Human Crew versus the mutants; and Sam against Drake. And the prophetess Orsay and her companion, Nerezza, are preaching that death will set them all free. As life in the FAYZ becomes more desperate, no one knows who they can trust.

If you read the first of my Goodreads updates as I started reading Lies, you'll know that I was immediately unimpressed. After what I felt was the disappointment of Hunger, the second installment in the 'Gone' series, I kept my expectations low. However, I am pleased to say that the last 100 pages were absolutely amazing - I was reading it on the bus, and I almost missed my stop I was that engrossed! Grant obviously upped his game in this great read.

As a mostly spoiler-free overview, the Gone series follows an area called Perdido Beach, where one day, everyone over the age of 15 vanished - or poofed, as they like to call it - and an impenetrable dome formed around them, blocking them access to the outside world. With all contact cut off, the kids are struggling to survive - food, water, electricity and resources are running out fast, and as the danger increases, so does the unease among the kids, with fights breaking out and sides being made.

I guess I should start off by explaining what I didn't like. In contrast to some other reviews that I have read, I've never really liked the characters. A lot of them annoy me - I think Grant's characterization of their different powers is fantastic, but the only people I can stand are Dekka, Little Pete, Mary, Edilio, and Diana. The rest of them are just so irritating and whiny, and whilst I can understand that they have a reason to be like that - I mean, I'm sure I would be too if all the responsible adults suddenly vanished - but it just gets on my nerves. So imagine my horror when about a dozen new characters were suddenly created out of nowhere! Although the book improved greatly, especially towards the end...damn, that was the worst idea ever.

Know what was even crazier? The fact that Grant decided to create a whole new island! It has been seven months without the adults, and the kids have yet to explore the whole expanse of the dome, which I find strange at the best of times. But what each and every kid has forgotten - and mind you, there are quite a lot around there - is that on an island close by was a massive mansion, owned by two of Hollywood's most famous actors and their five children (who are just living their obliviously, by the way)! There is no realistically conceivable way that this could ever have happened - you wouldn't just forget that celebrities lived close-by with a house FULL OF FOOD AND WATER. I think that even if I wrote this whole review in caps, I still wouldn't manage to convey my utter anguish at this! It is the most stupid plot-enhancer ever - and I've read Twilight, so this is saying something! You can't just make up random characters in such a contained place and over such a long period of time! It just doesn't work out. I even asked my friend, a massive Gone fan, about this issue and she agreed with me - that's how silly it was!

Now that's off my chest, I can get onto something a bit more positive. Personally, I liked the plot for this novel - the Gone plot mostly set the scene, the Hunger plot was the most boring thing imaginable but the Lies plot was good.  I think what I liked was that it was much more based around the falling apart of their community, which was much more interesting than talking about coyotes and the Darkness - the most boring villains ever! I felt this was much more contained and I think it helped me to understand the inner workings of their society, and perhaps feel a bit more empathy towards them than I already did.

One thing I've liked continuously throughout the books is that it actually deals with some pretty difficult and controversial topics - alcohol dependence  drugs, smoking, prejudice, anorexia, bulimia, depression...When you first pick up these books, you wouldn't think the author would have taken issues like these and slid them in there - but he did, and I think that adds to the effect of making the reader realize that this was a normal, every-day society, until the FAYZ happened.

Overall, although the characters annoyed me to no end, the last 100 pages completely made up for it. I think I read about 200 pages today, whilst in school? I literally couldn't put it down towards the end - definitely an improvement from Hunger! I look forward to getting my hands on Plague, the fourth installment, soon.
Rating: 4/5
Posted by Nina @ Project Read and Review at 21:07