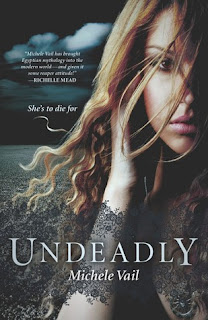 Molly Bartolucci wants to blend in, date hottie Rick and keep her zombie-raising abilities on the down-low. Then the god Anubis chooses her to become a reaper—and she accidentally undoes the work of another reaper, Rath. Within days, she's shipped off to the Nekyia Academy, an elite boarding school that trains the best necromancers in the world. And her personal reaping tutor? Rath.

Life at Nekyia has its plusses. Molly has her own personal ghoul, for one. Rick follows her there out of the blue, for another...except, there's something a little off about him. When students at the academy start to die and Rath disappears, Molly starts to wonder if anything is as it seems. Only one thing is certain—-Molly's got an undeadly knack for finding trouble.

I hereby dub thee the zombies version of Marked by P.C. and Kristin Cast. Now some of you will read that and will go running for the hills - but if you're like me and adore the House of Night series, despite it's never-ending storyline, then you've got to pick this up, as it is a must-read.

Undeadly is set in a slightly different world to ours, completely normal except from the fact that zombies are widely accepted. Some people are born with the ability to raise the dead, commonly known as ka hekas, who put the 'ka' (one fifth of somebody's soul, and not needed in the afterlife) back into the body to give it the ability to move. Molly has this ability - however, on her sixteenth birthday she is visited in her dreams by Anubis, the Greek god associated with mummification and the afterlife, and is chosen to become a reaper and the champion who will fight for him in the upcoming battle between himself and Set, his evil uncle. Needless to say, Molly's new-found title leads her into a whole lot of trouble!

Now I loved the concept of the story. A lot of novels that deal with zombies are apocalyptic - you know, the whole 'end of the world' deal. This wasn't - it was like how a lot of authors write vampire novels - present day plus zombies. I liked it because although it was set in the present-day, the zombies were still traditional, in both their actions and their appearances. I usually find that nowadays, zombies in books are created  as rather gruesome, with distorted features - for example, in The Walking Dead. In some ways, I found it quite refreshing - Vail's interpretation of zombies was something new and I found it much more realistic than other portrayals. The zombies were basically the animated dead.

I also loved the characters! Sure, Rick annoyed me with his persistence  but aside from him, Vail's characterization was fantastic. I adored Molly - I thought she was quick-witted, hilarious, strong-headed, and just generally charming. Despite the paranormal aspects of the novel, Vail managed to create a character that reader's could still relate to; she was just your average teenage girl, and I found that Vail's writing style brought that out of her. Rath was also brilliant; I think he's one of my favourite book crushes of all time! Every time Vail wrote about him...phew, cue the blushing! However, I didn't feel like there was enough of him in this novel - he was supposed to be Molly's personal trainer, and I would have liked to have seen more scenes between the pair - maybe with him teaching her more about the reaping business, or maybe her discovering things about his past, since really, he is pretty much a stranger.

Another thing that disappointed me was the ending. I got a bit confused - not to post spoilers, but one minute Molly was out in the middle of town, next minute up pops Irina, and after that Molly is on some bed in the middle of no where? Did I miss something? I vaguely learnt more about it as I read on, but it was still pretty confusing - and especially because it was the big climax. A lot was riding on that key moment, and I felt Vail really let it fall flat, which was sad because of how great the rest of the novel was.

Despite the ending being disappointing, the rest of the novel was fantastic. If this first installment is anything to go by, The Reaper Diaries series will be absolutely brilliant. My hopes are sky high, and I can't wait for the next installment.
Rating: 4/5
Posted by Nina @ Project Read and Review at 16:11