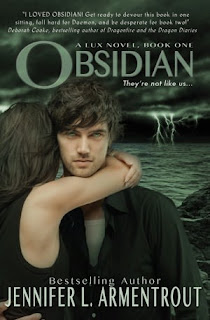 
Starting over sucks.
When we moved to West Virginia right before my senior year, I'd pretty much resigned myself to thick accents, dodgy internet access, and a whole lot of boring.... until I spotted my hot neighbor, with his looming height and eerie green eyes. Things were looking up.
And then he opened his mouth.
Daemon is infuriating. Arrogant. Stab-worthy. We do not get along. At all. But when a stranger attacks me and Daemon literally freezes time with a wave of his hand, well, something...unexpected happens.
The hot alien living next door marks me.
You heard me. Alien. Turns out Daemon and his sister have a galaxy of enemies wanting to steal their abilities, and Daemon's touch has me lit up like the Vegas Strip. The only way I'm getting out of this alive is by sticking close to Daemon until my alien mojo fades.
If I don't kill him first, that is.


Oh. My. Giddy. God. THIS BOOK WAS AMAZEBALLS. That's not a real word, but never mind; it's the only thing I can think of that can properly sum up all of my emotions about this read! I was a bit reserved about it at first - usually when loads of book bloggers adore a read, I tend to be an oddball and not enjoy it as much as I thought I would. This was totally not the case; boy, do I understand the hype now!

Admittedly I have wanted to read this for a while after stumbling upon the synopsis a few months back...and I seemed to have forgotten everything about it apart from that I wanted to read it - so starting it, I had no idea what was going to happen. I knew it was paranormal - but what was Daemon? Vampire, werewolf, fairy? He was an alien, it turns out. First point to make - there are not enough alien novels about. Earlier this year I read my first one, and now I am addicted to them; it was lovely to find another one that was equally as brilliant.

Second point, and something I was squealing over as I read it: this book is aimed at book bloggers. No book I have ever read before has been aimed specifically for reviewers - yes, there are YA novels and teen fiction that are roughly directed towards my age group, but nothing targeted directly at us. Yet a few pages into Obsidian, and she starts talking about reviewing books and 'Waiting on Wednesday'. As soon as I read it, I ran straight to my mother and started screaming about it. I did feel that Katy's profession as a book reviewer wasn't necessarily needed - her love of books was mentioned every now and then, but it just seemed like something Armentrout added in last minute - I didn't feel her passion for it. However, I did like the addition of it - it personally made me feel like I could relate to her character more, and I also think it was the author's way of reaching out to bloggers and saying, Hey, you know these fantasy books you read about? What if they became your reality? I can't be the only person who has read a book, sat back, and wondered what it would be like to live in that world. Armentrout brings reviewer's fantasies to life.

The plot was good. There was a long build up to the climax, which I normally would have found infuriating, but with this, it worked. At about 80% of the way through, everything exploded, and I literally couldn't put my Kindle down - I always wanted to know what was going to happen next. The pace was good and evenly spaced, the action scenes were thrilling and full of suspense, and the steamy chapters with Daemon and Katy - well, I blushed, for sure!

I thoroughly loved the characters. Katy did have her annoying moments, as most heroines do, but for the most part she was grounded, witty, and easy to relate to (well, aside from her being a book blogger, of course!) Dee was a bit full-on, but that was how Armentrout characterized her, and I felt she really brightened up parts of the novel. The development of the Arum was fantastic - for aliens I found them quite realistic and believable, and whilst I wasn't cowering from terror over them, there was a certain aspect about them that was shiver-worthy, which I always look for in a good bad guy.

Finally, onto Daemon. I feel like he needs a paragraph all to himself. At first, I didn't like him - I thought he'd be another one of those typical YA bad guys, who - despite being an utter ass to the female - still manages to slip in a gazillion make-out sessions. I love me some bad boys, but not the over-arrogant ones. And that's what Daemon was, until you got about halfway into the novel, and you started to understand the reason he acted so off. By the end, I was head-over-heels in love with him - just about the same as everything other person who has read this book! I honestly thought he was one of the best characterized story heroes that I've read about this year. He wasn't just a pretty face - his character had depth and background, and Armentrout kept his personality consistent the entire time. She definitely gets bonus points for that!

Overall, I really enjoyed this novel, and I feel that the hype it gets is definitely deserved. Obsidian was well-written and easy to read, with a gripping storyline that left you on the edge of your seat. Whilst the ending wasn't a cliffhanger, it has left me wanting more - fingers crossed I'll get my hands on Onyx, the next installment in the Lux series, soon!
Rating: 5/5
Posted by Nina @ Project Read and Review at 20:24