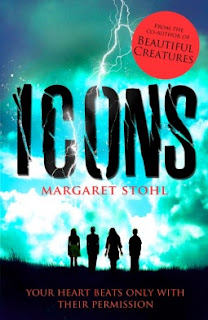 Your heart beats only with their permission.

Everything changed on The Day. The day the windows shattered. The day the power stopped. The day Dol's family dropped dead. The day Earth lost a war it didn't know it was fighting.

Since then, Dol has lived a simple life in the countryside -- safe from the shadow of the Icon and its terrifying power. Hiding from the one truth she can't avoid.

She's different. She survived. Why?

When Dol and her best friend, Ro, are captured and taken to the Embassy, off the coast of the sprawling metropolis once known as the City of Angels, they find only more questions. While Ro and fellow hostage Tima rage against their captors, Dol finds herself drawn to Lucas, the Ambassador's privileged son. But the four teens are more alike than they might think, and the timing of their meeting isn't a coincidence. It's a conspiracy.


I fell in love with Stohl's writing as soon as I picked up a proof-copy of Beautiful Creatures two years ago - so when I had the chance to review Icons, I couldn't say no. Unfortunately, something within this book just didn't click with me. This review contains some spoilers.

I think the main problem I had was that somewhere along the line, I seemed to have ignored the full explanation about the Icons and how the Lords got to Earth in the first place - it was vaguely described and the reader was told in hints and clues from Dol's memory, but it took me at least half the novel to begin to understand what they were and what they could do.

I also had a real issue with Dol and Ro's relationship. I can understand being close to someone since childhood, and how growing up together would bring people that kind of bond. But the pair of them acted like they were lovers, and I just think their relationship was too idealistic to be true. The relationship between Tima and Ro, and Dol and Tima was also very unrealistic, as one minute they were enemies, and the next they were hugging and all smiles - very strange! I also think that although the concept for the four children was brilliant, each character was not developed as fully as I had hoped, and I found their different powers and personalities very anti-climatic. I expected Dol to be a lot more emotionally aware, and as the protagonist I wanted to know a lot more about her. I also thought Lucas would be a lot more appealing to the audience, given both his powers and his place as the love interest - I wanted to like him alongside Dol, but I didn't, which might have been to do with how indecisive she was.

I guess I went into this novel with high expectations from Beautiful Creatures, and I think that was the wrong mindset to start reading with. Truth be told, the two are in no way alike, and I'd suggest that if you read this book, you go into it with an open mind. The concept was fantastic, and I'm interested to find out how the rest of them series goes - however, I am not sure I will be reading it. But who knows - maybe I'll feel differently at the time?
Rating: 2/5
Posted by Nina @ Project Read and Review at 18:48