Swans and Klons by Nora Olsen 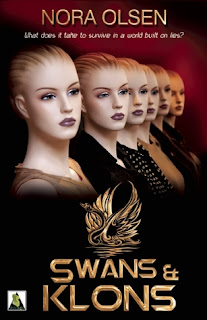 What does it take to survive in a world built on lies?

Sixteen-year-old Rubric loves her pampered life in the Academy dormitory. She’s dating Salmon Jo, a brilliant and unpredictable girl. In their all-female world, non-human slaves called Klons do all the work. But when Rubric and Salmon Jo break into the laboratory where human and Klon babies are grown in vats, they uncover a terrifying secret that tears their idyllic world apart.

Their friends won’t believe them, and their teachers won’t help them. The Doctors who rule Society want to silence Rubric and Salmon Jo. The two girls must flee for their lives. As they face the unthinkable, the only thing they have left to believe in is their love for each other.

I read the synopsis, and I fell in love. My two favourite genres - LGBT and dystopian - mixed together; it was practically my idea of heaven. However, the execution wasn't quite what I expected.

The concept was fabulous, I can't fault it at all - living in a dystopian Earth, teenage girls have been brought up in a society where only women exist. Men have long been extinct, and to reproduce and keep the population at a steady level, they clone embryos. This means that there are "Jeepie Similars" all over their world - people who are genetically identical to them. These Jeepie Similars can either be Humans or Klons - Klons are basically slaves for humans, but Rubric and Salmon Jo soon find out that actually, there is no difference between the two - their differences are based on the environment they have been brought up in.

I loved the idea of only women running the world. In the present day, although LGBT is becoming more accepted, women being with women is still frowned upon. In this society, it was completely normal - women and men was the strange concept, and it was an interesting twist on things.

However, I think the concept was the only thing I liked. The rest of it...I guess I built myself up for this novel to be absolutely fantastic, but I really didn't like it. It was a quick read, written not incredibly well, and god, the characters didn't half get on my nerves.

Salmon Jo. The girlfriend is called Salmon Joe. Isn't a salmon a fish? I know they were supposed to have weird names, but I felt even the Klons noun names made more sense - Dream, Shine, Bloom...they were better than reading 'Salmon Jo' about five times on every page. What made it worse was that because it was written in the third person and everyone was a girl, Olsen had to use their names to distinguish one from the other - hence even more 'Salmon Jo'. I just...I lost my patience, hearing Rubric go on and on about this fish.

I also think Rubric must have been a five year old - she didn't know what she was doing half the time, and I found her reactions incredibly fake. She gets to work with her dream mentor, and she slaps her; she wants to free all the Klons, but when she manages one, she whines and complains about wanting to go back to a society that she knows is corrupt. She was just very false and irritating.

I also think the storyline followed that same falsehood. There's going to be a lot of spoilers here, but after Rubric suddenly gets taken in for treatment (and I mean seriously suddenly), she is swept back out again by her mentor (who, may I remind you, she slapped!), and then SHE RUNS AWAY FROM HER SAVIOUR and is suddenly back with Salmon-flipping-Jo. And all within a few days - well isn't that just peachy?

It wasn't the worst novel I've read, but I had such high hopes for it, and in comparison it was just severely lacking. If you like LGBT and dystopian novels, then maybe you should try this, as the concept is good. I just felt it wasn't executed well, which was a shame.
Rating: 2/5
Posted by Nina @ Project Read and Review at 21:45