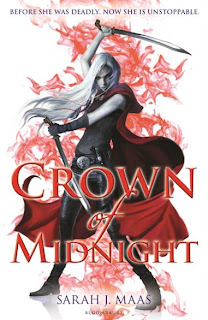 An assassin’s loyalties are always in doubt.
But her heart never wavers.

I have a stack of books to be reviewed, but as soon as I received a copy of Crown of Midnight, I knew I had to read it immediately. Throne of Glass was one of my favourite reads of last year, and left me with severly high expectations for it's sequel - but you know what? Crown of Midnight blew my expectations out of the water, and now that I've finished the book, I think I'm even more exasperated than I was before! Maas, what are you doing to me?

After gruelling challenge after challenge, Celaena Sardothien is finally the King's personal assassin and is on her way to gaining her freedom. But at what cost? As the King orders her to dispatch an old friend, Celaena begins to question exactly where her loyalties lie - with the King, or with the rumoured rebellion?

I still adore Celaena. Arrogant, feisty and a smart-ass, she is an amazing heroine that I surprisingly can't get annoyed at. I know a few people complained about how vain she was, but I stick to what I said before; if you were a beautiful, deadly assassin, wouldn't you be singing your own praises? In Crown of Midnight, the reader actually gets a few glimpses of Celaena's softer side, a reminder from Maas that although she appears as quite fierce and terrifying, underneath it all she is an eighteen year old girl who readers can relate to.

Can I also point out that I have now picked a team of the love triangle to side with? In my review of Throne of Glass, I couldn't decide whether I loved Chaol or Dorian better; Chaol, the brutish and dangerous Captain of the Guard who hides a softer side, and Dorian, the sarcastic heir to the throne who has a witty way with words. However, after Crown of Midnight, although I love Dorian...dang, do I have a hell of a bookcrush on Chaol! We see a lot more of him in this book, and it was clear that Maas had characterised him further, turning him into a main character as opposed to just a love interest. However, despite picking a team, I still don't mind the love triangle - Celaena isn't the type of character to mess the others about, so the interactions between the three of them seem genuine and realistic rather than annoying.

Maas further proved her amazing writing skills, and I swear every chapter left the reader on a cliffhanger - I constantly needed to know what was going to happen next! Even more action was thrown into this sequel, and some of the show-downs had me on the edge of my seat with anticipation. There was also a huge load of plot twists, most of which I never saw coming! Especially the ones at the end! I don't want to post spoilers, but let me just say that you. will. be. blown. away.

I genuinely didn't think this series could get better, but it really did. Crown of Midnight starts of a tad slow, but it quickly picks up pace, and soon you are completely lost of the imagination of Maas! If you love fantasy novel, then you've got to try this. Sarah J. Maas is an author to look out for.
Rating: 5/5
Posted by Nina @ Project Read and Review at 18:58