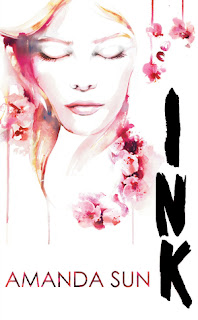 Katie Greene is lost in the wake of her mum's death. Sent to Japan, she meets gorgeous but aloof artist Tomohiro, whose tough attitude intrigues and scares her. Then things get really strange. When they're near each other, Tomohiro's drawings start to come to life…

Soon the wrong people begin to ask questions, and Katie and Tomohiro must risk everything to protect the truth.

I think I screamed when I got approved for an ARC of this. As soon as Ink came onto my radar, I knew I had to read it - not only was it a unique concept, but I love Japan, and a young adult book surrounding it and it's culture with a mythological twist? Well, how could I say no?

After the death of her mother, Katie is sent away to live with her Aunt Diane in Japan. At first, she hates it; with no friends in a country where they speak a foreign tongue and write in a different language, Katie is lost and just missing home. That is, until she stumbles upon a break-up between Tomohiro and Myu, and sees something that will change the course of her life forever.

Sun's descriptions were gorgeous, and within the first few pages, it already felt like I'd been transported to Japan. The descriptions were so rich, I could practically taste the sweet curry, see the blossoms, and smell the steaming rice. Her writing absolutely swept me away.

I was also impressed by the entire concept. YA books surrounding Greek mythology are starting to become more popular and slightly overdone - so a book continuing the mythology theme, but with an entirely different culture, was really new and eye-opening. And as Sun actually has insight into real Japanese culture, I thought it was really well-done, too.

Katie...I didn't hate her, but I didn't love her either. She was that very typical, indecisive heroine, who in a moment of danger is thinking about the signals her love interest is giving her. I know this novel had slightly paranormal aspects, but Katie was meant to be a character teens could relate to, and in real-life if I was being chased by mobsters, I wouldn't be blushing about some guy touching my arm. So that part of her really irritated me, alongside how she repeated the same thought at least ten times. Not to give away any spoilers, but at the end when she was deciding what to do - my gosh, was that her sole thought. She was just very centred around Tomohiro, and actually quite a bit of a stalker - I'm surprised he didn't go running for the hills! However, I did like him. This may sound silly, but the image of him I had in my head was that of Light Yagami from Death Note, which has to be my favourite manga/anime series - especially since when Tomohiro went into that zen drawing mode, it reminded me so much of how Light goes crazy when writing names in the notebook. Though thinking on that, I didn't actually have an image of Katie in my head at all. She had blonde hair? That's about all the physical characterisation I got.

Aside from the initial insta-love, I actually really liked both Tomohiro and Katie together. There was something realistic about parts of their romance, and the make out scenes - phew, is it just me, or is it getting a bit hot in here?

Overall, I really enjoyed this novel. It's recently been getting quite a few negative reviews, so I was worried that maybe my expectations were set to high. Luckily, I had no need for concern - the synopsis promised exactly what the book delivered, and whilst reading Ink, I was swept into this new world full of gods and goddesses, foreign words, and hot boys - complete book heaven! It was a unique concept, and I am officially in love with the Paper Gods series. Amanda Sun is an author to look out for.
Rating: 4/5
Posted by Nina @ Project Read and Review at 21:20