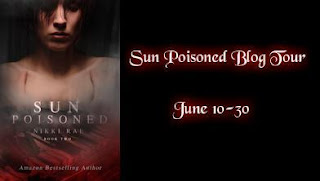 Nikki Rae is a student and writer who lives in New Jersey. When she is not writing, thinking, or reading, she is most likely hanging out with her gecko, Neil Gaiman, drawing in a quiet corner, or drinking tea by the gallon. Sunshine is her first book. 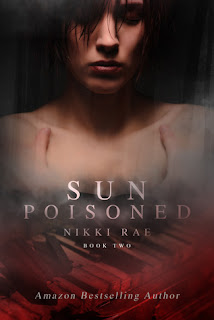 Sophie’s life has changed. She’s moved to New York, she’s playing music for new people, and she’s making new friends. Then there’s Myles, and the fact that he is now her boyfriend—and everyone knows it. There are a lot of new things to take in, but Sophie has no problem adjusting.

She’s not exactly normal, living in a half-human, half-vampire world, but she’s finally, truly happy. But some parts of Sophie and Myles’ old life still hide in the dark, waiting for the right opportunity to strike.

Sophie’s having nightmares again, but they aren’t about her; Myles is hiding something that she’s not sure she wants to know.
And one lie will change everything.
No matter how hard she tries to cover up the marks her monsters have left behind, they never truly go away, and Myles’ monsters are no different.
Once again, Sophie’s caught between life and death, but this time, only she can save herself.

Sunshine has to be one of my all-time favourite indie books , so I was super excited to see where Sophie and Myles' adventures took them in the sequel, Sun Poisoned. At first I was a bit apprehensive, as the storyline seemed to just go round and round in circles. However, the pace quickly picked up, and in the end I was laying on my bed bawling my eyes out.

For those who haven't read Sunshine, Sophie is a damaged teenager and refuses to let anyone in. Well, that is until Myles turns up - and Myles just so happens to be a vampire. Blasted into a new half-human, half-vampire world, Sophie suddenly finds herself face-to-face with not just a flame from her past, but a new, vampy nemesis. Sun Poisoned finds Sophie, Myles and the gang living in New York as they try to make a name for themselves in the band world. However, the past isn't that far behind them, and too soon Sophie finds herself caught back up in the madness of the paranormal.

As I said, for the first half of the book or so, it did kind of go around in circles; Sophie woke up, had band practice, played at a gig, sold merchandise, walked home with Myles, ummed and aahed about whether to make out with him, had a quick make out session, went to sleep, and repeat. I actually did begin to wonder whether I wouldn't like Sun Poisoned and this repetitive cycle - but luckily, as soon as I hit that halfway mark, the book completely changed. The pace picked up, the storyline became interesting, and a lot of emotions began to be provoked out of the characters. Sun Poisoned quickly changed from boring and same-y to the Sunshine series that I have grown to adore.

I thought some of the characters went through a vast improvement since the last book. Although I liked them, some of them had slightly unrealistic characteristics, and in the sequel they just came out as much more believable. Sophie still treated Myles a bit badly and I did have small moments of wanting to slap some sense into her - especially over the whole deal about him lying to her. As the reader and an outside viewer, I could understand Myles' point of view - but Sophie didn't even give him the benefit of the doubt. It was a tad bit annoying, but a definite improvement from how she treated him in the last book.

On a whole, I thought that Sun Poisoned was a lot more emotional than the last book, which I guess is kind of strange - Sunshine dealt with a lot of difficult issues but didn't quite hold the same depth, whereas this one was more emotional but actually dealt with the vampire side of things more. I did cry quite a few times - not to spoil anything, but at that halfway point I was a sobbing mess of feels.

Overall, I really did enjoy this novel. Sunshine had a unique concept which was transferred into Sun Poisoned. The beginning was disappointing, but the last half completely made up for it. It's not often that novels are better than their prequels, but this definitely was. If you love paranormal and indie books, and like the sound of the synopsis, then go out and get this book now. You'll love it, trust me.
Rating: 4/5
Posted by Nina @ Project Read and Review at 17:05