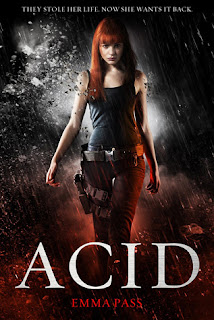 2113. In Jenna Strong’s world, ACID – the most brutal, controlling police force in history – rule supreme. No throwaway comment or muttered dissent goes unnoticed – or unpunished. And it was ACID agents who locked Jenna away for life, for a bloody crime she struggles to remember.

The only female inmate in a violent high-security prison, Jenna has learned to survive by any means necessary. And when a mysterious rebel group breaks her out, she must use her strength, speed and skill to stay one step ahead of ACID – and to uncover the truth about what really happened on that dark night two years ago.

I have to admit, it's the cover of Acid that first caught my eye. I love me some badass heroines, so as soon as I saw the girl on the cover, I knew it had to be added to my TBR list. But when I suddenly got a review copy of it? Lets just say I was over the moon with joy. Although the book didn't keep me up at all hours, it was addictive; the plot was thick with incredible twists, and I always wanted to know what was going to happen next.

It's 100 years in a future England, and ACID are in charge ofn the government and hold all of the power. Stuck in an all-male prison for the last two years for killing her parents, Jenna Strong is suddenly rescued and freed back into the world - she is given a new face, a new name, and a whole new identity, and is sent out to live and work as normal. However, being Jenna Strong isn't exactly as "normal" as it could be, and eventually our heroine finds herself trapped in a whole cycle of trouble.

Firstly, I love the fact that this is a dystopian SET IN ENGLAND! Most dystopian fiction I've read is set in America, and whilst I love it, when different places are mentioned, I don't have a clue where or what they are. With Acid set in the UK, I knew the names of the cities and different modes of transport; it was easier for me to get sucked into the book as images were easily created in my head.

I loved Jenna. As the picture hinted, she was badass and feisty and everything great - maybe not as much as the synopsis promised, but enough. It was difficult to not relate to her in some ways, as most of the readers will have felt isolated at some point in their lives, as well as being a scapegoat for someone else's misdeeds. Jenna was well-characterised, and although I felt she character-slipped every now and then, it was still pretty believable.

Max...oh, Max was adorable! A book crush for definite! I just wanted to gather him up in my arms and tell him that everything would be okay. Although he wasn't the narrative, I still think that readers will find ways to relate to him and sympathise with him. It also doesn't hurt that he's hot.

I thought Acid was written well, although as I said earlier, the characters' personalities did occasionally slip up. The pace was usually quite good, and any action sequences were well described. However, ahflway through the book it did begin to lag a little bit. Once I'd finished, I understood why Pass had to write the more boring parts in, but it just ruined it a little bit for me, as I wasn't as hooked as I could have been. I wanted to know what would happen, but I wasn't bursting to know - it didn't keep me up ridiculously late at night, I could easily put it down mid-chapter. For a book with such a great and unique concept (something that is difficult to achieve with dystopian literature), it could have been fantastic - unfortunately, it was just great.

Please don't take it being "just great" as a bad thing - great does mean great after all, and I have high hopes for this series. It was an excellent novel, especially for a debut, and I think that if you love dystopian fiction on a whole, then this should definitely be added to your TBR list.
Rating: 4/5
Posted by Nina @ Project Read and Review at 15:39