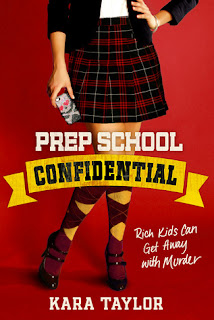 Anne Dowling practically runs her exclusive academy on New York’s Upper East Side—that is, until she accidentally burns part of it down and gets sent to a prestigious boarding school outside of Boston. Determined to make it back to New York, Anne could care less about making friends at the preppy Wheatley School. That is, until her roommate, Isabella’s body is found in the woods behind the school.

When everyone else is oddly silent, Anne becomes determined to uncover the truth no matter how many rules she has to break to do it. With the help of Isabella’s twin brother Anthony, and a cute classmate named Brent, Anne discovers that Isabella wasn’t quite the innocent nerdy girl she pretended to be. But someone will do anything to stop Anne’s snooping in this fast-paced, unputdownable read—even if it means framing her for Isabella’s murder.

All I really have to say about this book is HELL TO THE YES! Okay, I have a lot more to say than just that, but as a quick summary, this book was amazing. I'm a sucker for a mystery/thriller novel, so that combined with girls who may as well be straight out of Gossip Girl is a must-read. However, whatever expectations I may have held before I read it was nothing compared to how I felt afterwards; Taylor blew those expectations right out of the water.

Anne Dowling isn't an arsonist, but that's not how her academy sees it. Sent away to a boarding school, Anne focuses all her attentin on getting back home to New York - that is, until her roommate ends up dead. Determined to find the killer amongst a sea of eerily quiet students, Anne begins to investigate the murder on her own with the help of cute boy Brent, and her roommate's hot twin brother, Anthony. However, what Anne uncovers is so much more than just a murder.

Prep School Confidential draws the reader in, enveloping them until you're going through the story alongside Anne, her fears and feelings transferring over to you. The reason this book works is because you are left constantly guessing, right up until the very end. With the way Taylor wrote it, you end up suspecting several different people all at once - you end up trusting no one, just like Anne, and are constantly looking out for any ulterior motives. It's addictive and engrossing.

As a rule, I despise the cliché arrogant, gossiping school girls, which is exactly what Anne was - to begin with. Through the novel, Anne changes from this annoying school girl to a smart, determined young woman, and I actually ended up really liking her. In a strange way, she was quite down to Earth throughout the entire book, as well as being pretty realistic; definitely a character that grows on you.

I don't normally like love triangles, but I loved both Brent and Anthony! You know that feeling where you want to pick a team to root for, but you like both sides? It's infuriating. Brent was, like Anne, the cliché preppy school boy - but he was adorable, and I couldn't help viewing him like a kicked puppy! Unlike Brent, Anthony was the typical bad boy, with sexy stubble and a mystery past - um, swoon alert! Basically, Taylor is amazing at characterisation and developing in-depth characters, making them seem more realistic than just works of fiction.

Is it bad that I didn't even consider the killer a suspect? They briefly flitted through my mind - and in the end it did make sense - but I was definitely leaning towards some other people. I guess the truth of it is that you really don't know, right up until the end. As mysteries go, this is the best one I've read yet.

Overall, I fell in love with this read. I was completely addicted to it right from the first page, and I loved its unpredictability. For a debut book, this is actually amazing - I've seen authors who have been writing for years and still haven't managed to create such a thrilling read. If you love thrillers and mysteries, or are just intrigued by the synopsis, go and pre-order is asap! Taylor is an author to look out for.
Rating: 5/5
Posted by Nina @ Project Read and Review at 09:45